1.
found these scraps bundled and tucked into the pages of journal six, between entries from august 2004, right up against the edges of my twenty-ninth birthday. it is very much something i would have written against the edges of my twenty-ninth birthday, though i don't entirely remember writing it outside of the physical act. i remember walking over to the rogers building on my break, considering a monologue that would combine memories from two cold summers in my experience:

the summer after my first love (i wanted to at least be her best friend, but she wouldn't let me that close) tortured me by enticing my relentless eighth grade crush (a dancer i'd sat next to at lunch two years earlier) to fall in love with her, instead. he'd write her letters and give them to me to give to her. she'd read me his letters out loud, as if i hadn't read them already, xeroxed them, maybe, burned up the copies in a brass bowl behind the garden shed: the cost of my services. they "dated" (like an eighth grader in a public school and a ninth grader attending a private catholic school in another county) for two agonizing months over the winter and never exactly broke up. this may have been related to my quietly withdrawing my messaging services after she made me sit next to them in a darkened room while they kissed and then made me listen to all her other friends gush about what a beautiful couple they made after he went home. it was true. they did make a beautiful couple. what's more, they made a publicly acceptable couple, a crowd favorite, an episode of the fucking wonder years, unlike any variant of relationship involving me. i'd been stalling on processing that experience, in large part because it essentially burned clear all my landscape of all accumulated romantic options, inaccessible though they might have been, and there are an awful lot of pre-authorization forms for me to fill and properly file in the identification of a new love interest. it seemed like a lot of work, this being any example of the sort of outcome i could anticipate.

then, all of a sudden, the first couple weeks after school let out, she moved away.

it had been coming from a long ways back, but at the same time it felt like it just happened. all of a sudden the woman i loved was just... gone. i wonder about the root system to that move, and i don't. i believe, now, that there was trauma in her history, trauma on scale with my own, maybe bigger? definitely bigger, from what you could see. that might have to do with the reason i loved her: we'd been broken in resonant ways. we understood each other. we helped each other, at least until she boomed my not-boyfriend.

over the course of those three months with the miraculous sunsets (mount pinatubo, not mount st helen's) and my mother's escalating depression, i negotiated an emotional reckoning for which i was not remotely prepared. real fucking grief. unholy grief. unchecked grief. grief that kept me up all night. grief i could not claim, for what felt like intimate betrayals by two of my closest friends, neither of whom i was supposed to feel that way about. there was a housing development under construction outside our subdivision and i'd walk there with my mother's SLR; not a piece of machinery i had any idea how to operate, but i was fifteen and not about to let that stop me. note the icon: it was from one of those rolls.

the summer immediately after that, also cold, my friend the dancer was hospitalized for his first suicide attempt, my relentless eleventh grade crush turned into an exceptionally painful lou reed concept album inventoried in the import section of a record store where i couldn't even afford domestic releases, and i realized - i really understood - that the reason my parents weren't pressuring me to perform better at school was because there was no way in hell they could afford to send me to college. my cognitive issues and family obligations made it nearly impossible for me to do the kind of work i'd need to do to get accepted to the right school - obtaining sufficient scholarships? figuring out a work study program? learned helplessness does not provide a lot of tools for overcoming learned helplessness. that's kind of the point. the overculture benefits from a certain percentage of its population getting crushed by the overculture: so i let myself get crushed. i buried it. i considered doing something rash. crashing the car. running away. joining a cult. starting a cult. getting pregnant. falling in love with another woman. earnestly complaining about my circumstances to an authority figure who might be able to offer some meaningful insight. for reasons, flimsy reasons, iron clad reasons, reasons both noble and hopelessly insincere, i couldn't do it. i dropped the ball bearing down the stairs and let it roll away.

in 2004 i can't say i was ready, yet, to look at these variables square, so i looked at them from the side. narratively, i made my story into that of a stranger. it was a stranger's story, if i'm honest. that stranger i woke up in bed with every morning.

2.
so here are these three quarter-cut scrap pages i found today in journal six. they are presented with minimal line edits for clarity. i wrote them fifteen years ago in the basement of the rogers building in green rollerball ink. i lost the thread of what i thought i was writing any number of times so that i could start drawing out the thread of what i needed to write some years later. that's the thing about writing that fails in the moment: it might just be building in to what you will need to write some years down the road.


cold summer
walking through the housing development being built the summer after mt. st. helen's erupted. glorious sunset. girl with camera. streams of light, reflected back up in pools of fallow rainwater. the hum of the power generator at the edge of the subdivision. (watched her mother put vodka in her morning coffee.) something in the distance, out in the woods. she remembers how this was a meadow, remembers how last summer she ran through sunflowers and rode to the mailbox with a letter for her friend (at camp) each day. what does she see? what does she think she sees? what does it turn out to be? there is nothing, no sound, but the crunch of her sneakers on the limestone path. she leaves the path, walking through long grass. 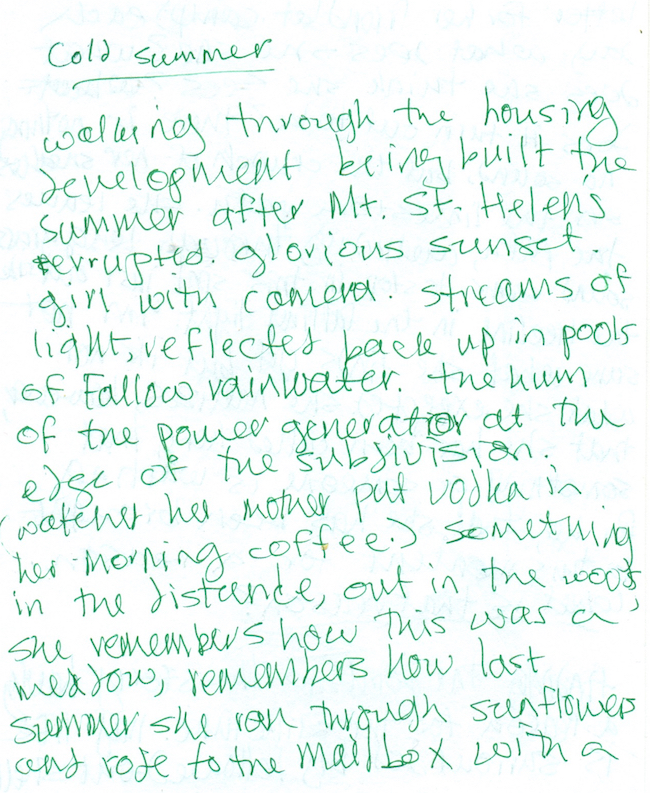 sound seems to stop in this spot just outside the treeline, in the falling light. i'm not sure what she finds yet, but it's not what she expected. she realizes, however, that she has been called here, that something or someone is waiting for her, that she has been brought to this moment for a reason. what is that reason? finding the point to the story. having a reason for the structure. my life is surrounded by hollowed out shells, rituals without purpose, boxes and bowls i cannot fill. i buy books i do not write in. i fill my space with so many places to store - ideas, precious things, meaning - and yet there is no meaning, no purpose, no value to put in them. i take the day off to do things and i do not know what to do with them. what is the point? what is the reason? what am i doing with my time, my resources - my shell? 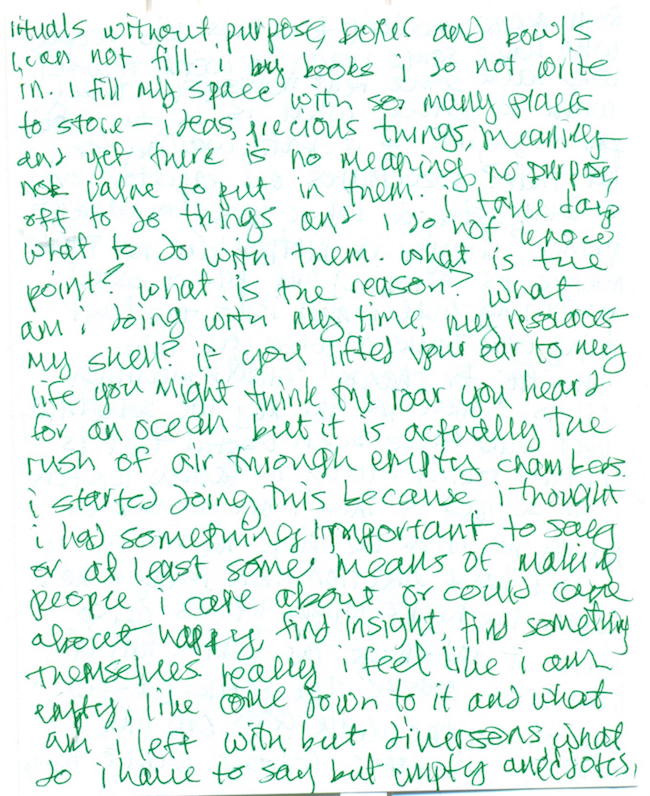 if you lifted your ear to my life you might think the roar you heard for an ocean but it is actually the rush of air through empty chambers. i started doing this because i thought i had something important to say or at least some means of making people i care about or could care about happy, find insight, find something themselves. really i feel like i am empty, like come down to it and what am i left with but diversions, what do i have to say but empty anecdotes from people who don't face this void, people who have some vision to work toward, who have some real message they want to convey. what is in the woods for my girl? is it death, waiting for her there? razor blades and rapists? or a fairy castle, a white horse, a valiant prince? maybe it's neither here nore there, maybe it's a rotting out pile of wood, something that really isn't the first thing you think of when you thing "impetus for change," "growth incurring crisis," more it's like my life, something that could have been useful that is instead rotting away in fallow waters. i am so tired of this. i am so sick of having no idea. no plot. no vision. if i don't have direction, there really is no future, the needle tangles up it's cargo behind it and snags the fab ric full of little holes. wasted the fabric, wasted the thread, the needle goes on, like i always do, same today same today, same today same today same same same same samesamesame so that's what i center around, the absence of a center. how do people live like this, with this void, with the apathy, with the fear? how can i be happy, ever, facing this emptiness every day, this pointlessness, this ambitionless flailing in the fading light? you want a direction, you want to love, you want something you are willing enough to commit your life to. you want things to grow, in the summer time. by the cold window, smelling the cold in the air, through the jewel osco parking lot with the distinct sensation of pending snow. sometimes it's so close to the surface sometimes it's so close to your fingers but it won't come, but nothing changes. but you return to your same today same today same the plot of the story is the absence of plot, the approach to nothing, the way the figure standing by the closet was just a sheet draped over a lamp. 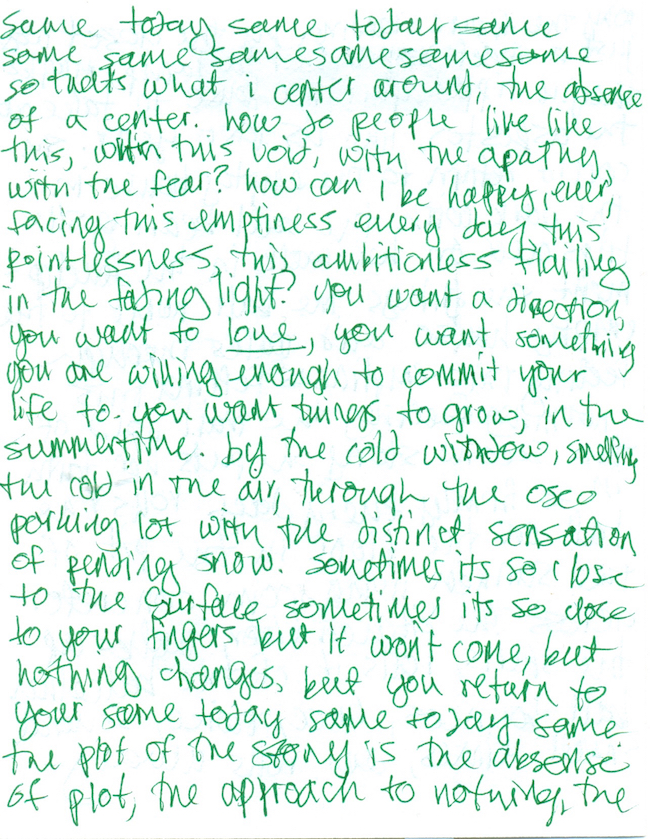 maybe they've ripped apart the house to take out the asbestos, like us last year. she could return to the empty house in the dark with the ball bearing she trips over on her walk in the development. she brings the ball home to the empty house and walks through feeling this emptiness feeling this nothing feeling the frail void of this second story she puts her faith in so firmly every day. rolls the ball on the floor. in the pit of the sunken living room concrete. across the kitchen floor, walks up the stairs, rolls it off the balcony. ball bounces, once, twice, several small times, and rolls away.
Collapse