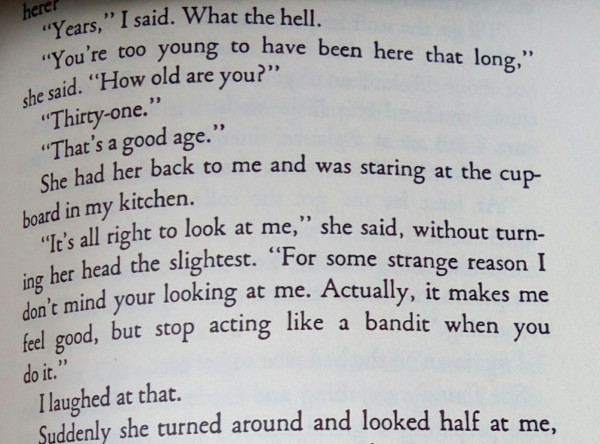 in the weeks before i turned seventeen, i read and i read, i read like i couldn't remember reading before. come home, i thought, come home now, it's time, i thought, i whispered, i whispered and i thought, though i wasn't entirely sure why. i wrote the first pages of a speculative fiction novel i had no intention of publishing - or finishing - or letting anyone else read. i fell into the emptiness sounded by that inversion of teenage ambitions with concerning delight. i'd completed four novels by that moment in my history. i'd let other people read my first four novels: my first, about a eleven-year-old girl fated to be sacrificed to the devil as a bride (subtext, you're choking on it), vanished into a social dispute and was never returned. my most recent, about a knocked up drifter who comes back from the dead, lived for more than a year under an estranged friend's bed and still does not smell acceptable. my second, the pregnant dancing girl serial from middle school, it always came back like a pox upon my developing craft. i named the protagonists after eighties pop stars. increasingly, i wasn't entirely sure i wanted my work to be read if my work could be read by just anyone. the resolution of this conflict has yet to be seen.

perspectives shifted that summer. like hanging upside down off the living room couch for five minutes that could feel like an hour, like hanging upside down until my center of gravity understood itself onto the ceiling. i'd stay like that until i couldn't stand it; it was a peculiar high. just outside my experience but still immersed in it completely. entering a room i'd lived in since before memory for the very first time. space travel made with inexpensive ingredients you can find at home. i remember walking down the stairs with a mirror tray under my chin. it is not an experiment i can recommend in good conscience, but it sure felt weird.

one of my more mysterious prepubescent beliefs: mirrors could only break in old scary movies. i'm not sure how i came to believe that any consumer-end mirror manufactured since the sixties was as good as indestructible. i might have misunderstood a segment on david horowitz's consumer advocacy weekly, fight back, which i religiously watched every week through elementary school, excited for a future when maybe i, too, could make a living by throwing tooled-leather combination-locked briefcases down stairwells and quipping snarky observations at the results. as much as i loved the program, sometimes they did things with gorillas, i didn't exactly understand what it was driving at a lot of the time and wrote off a lot of stuff to "damn, adults are weird."

supporting evidence for my mirror theory came from that afternoon at my friend bill's house. going through the trash in his parent's bathroom (i didn't ask) he'd found an empty eye shadow compact with a mirror on the inside lid. his first idea for it involved a laser, like you know, that one thing? you had to have seen it. it was on TV. remember that one thing, with the mirror, and the laser? and all he had to do was - that thing with the - he needed the other thing. i don't have the other thing, bill told me, and i don't know where to get one. i didn't either. the laser hadn't worked out and he was feeling resentful, so by the time i showed up the project had devolved into throwing the compact as hard as possible onto the brick patio over and over again. he'd done it a bunch of times, i tried it a bunch more times, he tried it a few times after that, i jumped on it a couple times for good measure. thing wouldn't break. the plastic exterior shell was a mess, but the mirror remained uncorrupted. god, it was miraculous. clearly, this consumer-end mirror manufactured after the sixties was indestructible, and i told bill as much. david horowitz said. bill wanted to run a few more tests but needed to secure funding, which would take some time. he wasn't getting an allowance that month as a consequence for something he'd done. i didn't ask. maybe it involved digging through his parent's bathroom trash?

we quit the mirror busting initiative for the afternoon, but later that summer bill told me that he'd hit it with a sledgehammer, put it in the freezer and then in boiling water right away, paid the stoner kid down the street three dollars to run over it with his van, twice, mirror wouldn't break. he really wanted to show me that not broken mirror, he said, but then his family was visiting his grandma in florida and he accidentally kicked it down a rainwater sewer so probably it got ate by an alligator. even at the time, i suspected aspects of this story were somewhat enhanced, but that's why bill and me hung out. we preferred one another's enhancements.

when did i bring home this funny orange mass market with the charmingly contrived cover from the library swap rack? i unnecessarily concealed the title from my mother, who'd never once demanded i account for anything i read. i know it had been stowed for at least a year, spine to the wall on a shelf above my bedroom's sight line, long enough for me to (at least functionally) forget it was in my possession, but i wasn't sure when i'd brought it home. 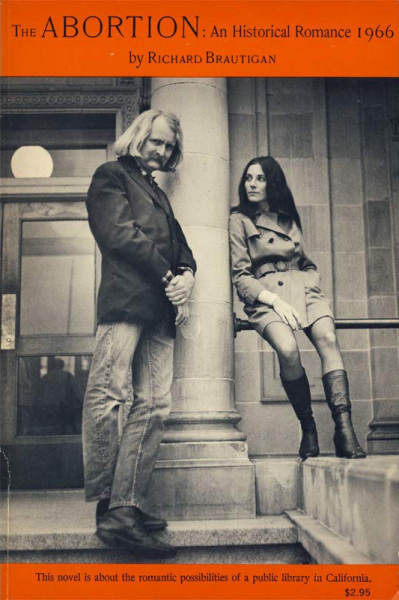 clearing my space in preparation for a new paint job, i found the book and, again, puzzled over it. i dropped it open and read from the middle. i always do this with books. also, i read the last few pages first, i skip ahead, i drop back, i make every narrative into one about time travel. i can't be bothered with all these cultural taboos about spoilers. everything that happened in a published story has already happened in that published story. not knowing won't change it in the least. the entire point of my audience is so i can find out how the author is going to tell me about what happened. if it's worth my reading time, it won't matter i already know where things are going, and a lot of the time it helps me power through a passage where i might otherwise stall out. besides, if the end looks like crap i'd rather read something else. the first thing i read in one of richard's books:

"If you get hung up on everybody else's hang-ups, then the whole world's going to be nothing more than one huge gallows."

got my number, i thought, read the book in one night, then read it again in the morning. i read it four more times before the summer was out. how he writes, i thought, transcribing a favorite line longhand into the back cover of a notebook. complicated things described simply so that simple things could be given the complexity they deserved. brautigan's writing rewired my thinking, shifted my perspective around pacing so that it was less "first this and then that and then that, resulting in" and more "holy moment! holy moment! holy moment!"

grammar was a tool for sculpting, not a prison from which there was no escape. the grammar didn't matter so much as the language it shaped; the goal was a version of coherence you could switch into, not the grammatical institution of coherence to which many readers assume entitlement. his writing style wasn't a rebellion as much as it was an assertion of an intimate priority. the text wasn't caught up in competition or delusions of universality. it existed for those readers for whom it needed to exist and didn't begrudge anyone else.

and then there was the story itself.

vida and her alien body, more beautiful than she could handle. traumatized by her appearance, not able to move through any space as invisible as she needs to be, she finds her way to the protagonist who has also made himself invisible; together, they draw one another into form. thank you, richard. i needed that.

the passage pictured at the top of this entry, i remember laughing at it mightily during my first reading: she put into words a conflict i'd been negotiating for months, convinced there was no language for it. there it was, and it couldn't be simpler: for some strange reason i don’t mind your looking at me. actually, it makes me feel good, but stop acting like a bandit when you do it.

a few years later but still before i turned twenty, i'd special ordered every brautigan omnibus edition within a month of starting at my first bookstore. that picture of the cover is from the internet. i don't know what happened to my little orange mass market. i must have given it to someone, i couldn't tell you who. i hope it was the right person. i hope they honor it still, or gave it to someone else who does.

today i will admit that i wish i'd kept it, that i'd like to read one of my favorite books as an island unto itself, not a rowhouse immediately smashed up against that novel i've never been able to read. the last novel. the novel about the author's looming suicide. brautigan had been gone for eight years by the time i discovered him. by the time i discovered him, we were in the decade after his death. i read and reread my first novel of his a half dozen times before my creative writing teacher filled in the blank of why i couldn't find a damn thing of his on the legitimate library shelves. it broke my heart and i buried it. ancient history, right? not even the same decade.

i mourn you, richard. i mourn you still. thank you for your work.
Collapse