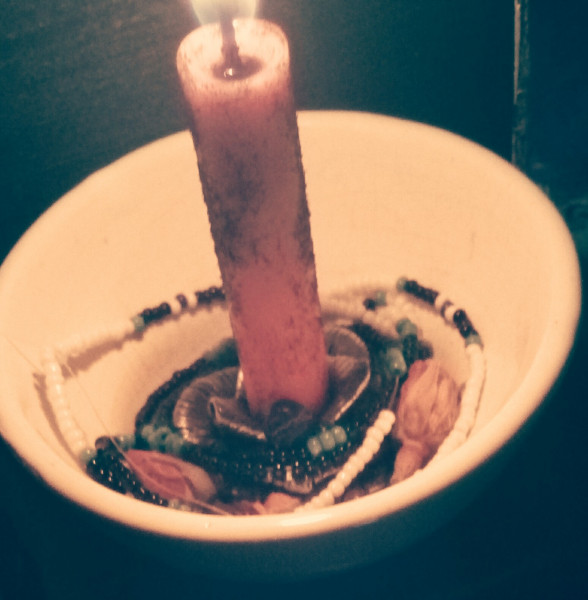 apparently i did this working right before we found the carbon monoxide leak. wish i could remember what it was about. rosebuds, pink candle dressed in black tea dust, bead necklace: might be recovery? i've been negotiating something a little like trauma around how bad the CO stuff got. for instance: finding pictures on my phone documenting spellcraft i don't remember doing. that's some compromised cognition shit right there. or it's the magic protecting itself. maybe it helped us find the leak.
*

12-8-2015 10A
i was in my first term at a junior college and feeling lonely. there was a punk girl, she'd been the singer in a band. her hair was black and spiky, her skin very pale; she looked like a mix of siouxsie sioux and gaimen's death. there was a very transitional quality to the time and the spaces. nothing exactly was here nor there. i'd walk around the gymnasium which might have been at my old high school; i'd try to go into my old locker and couldn't remember the combination. the locker opened anyway, and it was empty, scraped out, scratches and old adhesive on the green-enameled metal.

i wanted to dye my hair red - believed authorities at school wouldn't approve, force me to dye it back. saw one of the instructors with red hair growing out and felt angry about the hypocrisy.

the punk woman knew a lot about music. i'd almost compulsively fallen into a mode where i was trying to get closer to her, but it was hopeless. she didn't like me. we kept ending up around each other, though, so i was self-conscious and uncomfortable about my strange attraction to her. she was an artist, extremely creative, she had a visual journal everybody was passing around and it was my turn to look at it. the journal was, also, somehow mine, the visual journal i have now. i was trying to figure out a private moment so i could flip to the back most, still empty pages and jot down the name of a band she liked that i wanted to explore more in light pencil so it wouldn't damage any of her/my work. for some reason i felt anxious about doing this in front of anyone, so i kept trying to hide.

there was a part of the campus that looked like a dive-y version of the alley and it was apparently a transitional space near her apartment. she was having a band play there, i think? the band whose name i was focused on getting - vicarious varshan*? - had a very distinct, 80's era xerox friendly logo with an abstraction of a woman's face. she looked like the punk woman. her apartment was like the dive-y green room area of a concert venue, torn wallpaper and curb-snagged vintage furniture from the 1930's. i was worried about being there at all because she did not like me and i felt like i was messing up the vibe she wanted, but i really wanted to see the band.

over the course of the show it became apparent that she was pregnant. surprising, in fact, was that nobody had noticed this yet: she was in her third trimester. a couple other people - it seemed like they were on good terms with her - were working on a concert poster in the living area. the punk woman laughed and showed the other women how if she leaned forward a little you could see her son pressing his form into her belly. everybody laughed and went back to their work - except me. there wasn't a place for me here, even though it had always been my apartment as well. i gave up, feeling sad, and retreated to another part of the space, where there was an old reclaimed 4-poster bed surrounded by ripped up concert and gallery show posters on the walls. i sat on the bed, feeling anxious and guilty about writing the band name in her book, anxious about sitting on her bed, and tired of feeling guilty and anxious about such things. i had my shoes off and was wearing cheap jeans and an old, ratty t-shirt. she came in and found me sitting on the bed and i thought i'd better get out of the space but then found i was sick of worrying about impressing her and stayed, just sitting.

she looked at my feet. "your feet are like wolves," she told me. i looked at them, too.

"there is a canine quality about them," i responded.

there was an awkward silence. "i like how when you showed us your son," i said, "i like how his hands were forward, like he was sending energy to the band. play on, play on."

she didn't really respond but sat there, staring at me strangely. i felt weird, inadequate, anxious, guilty. finally, she said, "could we please be friends?"